The simple graph has brought more information to the data analyst's mind than any other device.

Plotting is an essential component of data analysis. As a data scientist, I spend a significant amount of my time making simple plots to understand complex data sets (exploratory data analysis) and help others understand them (presentations).

In particular, I make a lot of bar charts (including histograms), line plots (including time series), scatter plots, and density plots from data in Pandas data frames. I often want to facet these on various categorical variables and layer them on a common grid.

Python plotting libraries are manifold. Most well known is Matplotlib.

"Matplotlib is a Python 2D plotting library which produces publication quality figures in a variety of hardcopy formats and interactive environments across platforms." Native Matplotlib is the cause of frustration to many data analysts due to the complex syntax. Much of that frustration would be alleviated if it were recognized as a library of lower level plotting primitives on which other tools can be built.1

Many excellent plotting tools are built on top of Matplotlib.

Pandas plots provides the "basics to easily create decent looking plots" from data frames. It provides about 70% of what I want to do day-to-day. Importantly, it lacks robust faceting capabilities.

"plotnine is an implementation of a grammar of graphics in Python, it is based on ggplot2." plotnine is a recent attempt to directly translate ggplot2 to Python; despite some quirks and bugs, it works very well for a young product.2

"Seaborn is a Python visualization library based on matplotlib. It provides a high-level interface for drawing attractive statistical graphics." Seaborn makes beautiful plots but is geared toward specific statistical plots, not general purpose plotting. It does have a powerful faceting utility function that I use regularly.

There are several tools that can make the kinds of plots described here. At present, I have little experience with them. If anyone would like to help add examples, please get in touch.

"Altair is a declarative statistical visualization library for Python, based on Vega-Lite." According to Jake Vanderplas, "Declarative visualization lets you think about data and relationships, rather than incidental details."3 I provide Altair examples rendered as static images.

"bqplot is a Grammar of Graphics-based interactive plotting framework for the Jupyter notebook."

If you're interested in the breadth of plotting tools available for Python, I commend Jake Vanderplas's Pycon 2017 talk called the The Python Visualization Landscape. Similarly, the blogpost A Dramatic Tour through Python's Data Visualization Landscape (including ggplot and Altair) by Dan Saber is worth your time.

Much Python plotting development is done by open source developers who have an (almost) thankless task. I am extremely grateful for the countless hours of many who have helped me do my job. Please keep it up!

Why all the talk about ggplot?

The word "ggplot" comes up a lot in discussions of plotting. Before I started using Python, I did most of my data analysis work in R. I, with many Pythonistas, remain a big fan of Hadley Wickham's ggplot2, a "grammar of graphics" implementation in R, for exploratory data analysis.

Like scikit-learn for machine learning in Python, ggplot2 provides a consistent API with sane defaults. The consistent interface makes it easier to iterate rapidly with low cognitive overhead. The sane defaults makes it easy to drop plots right into an email or presentation.

An excellent introduction to the power of ggplot2 is in Hadley Wickham and Garrett Grolemund's book R for Data Science.

Below I have begun compiling a list of basic plots for exploratory data analysis. I have generated the plots with as many different libraries as time (and library) permits.

My hope is that this will (1) help you in your daily practice to work with what is available and (2) help inspire future development of Python plotting libraries.

Some rudimentary instructions on how you can contribute plots are here. General feedback or other plot suggestions are welcome.

The datasets used below are included with ggplot2. One is the Prices of 50,000 round cut diamonds and the other is Fuel economy data from 1999 and 2008 for 38 popular models of car.

The time series example is a random walk I generate with a quick Python script.

Here's what a few rows of the datasets looks like: 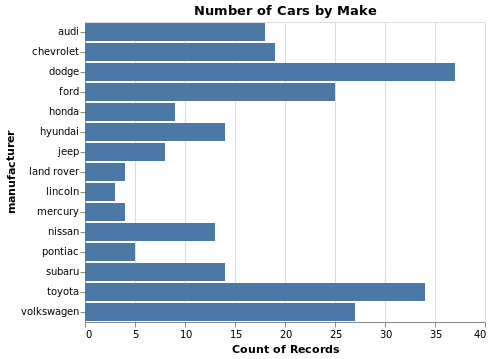 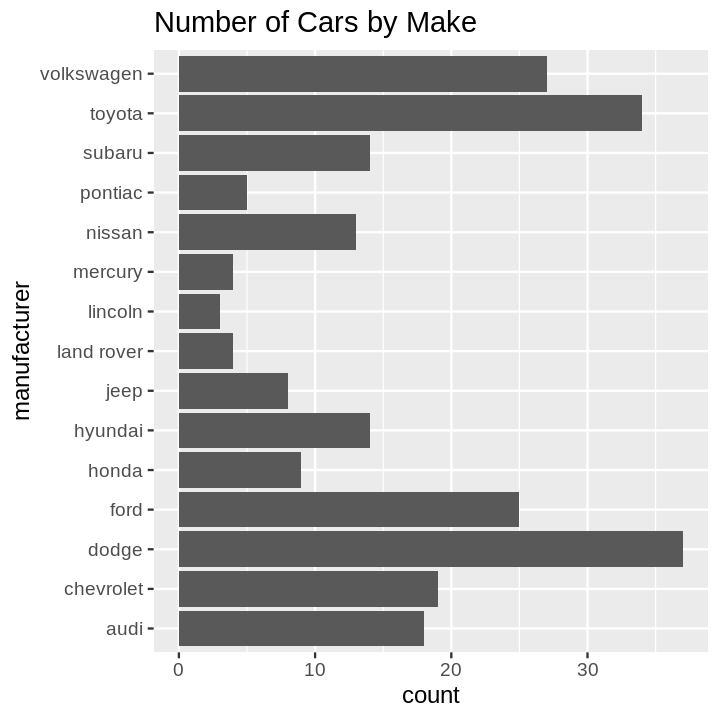 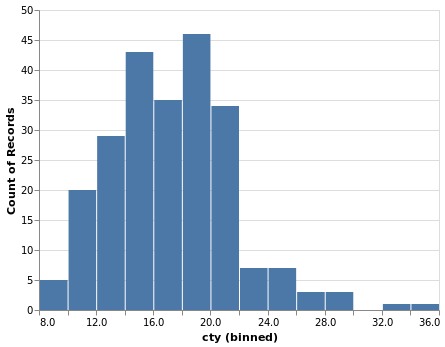 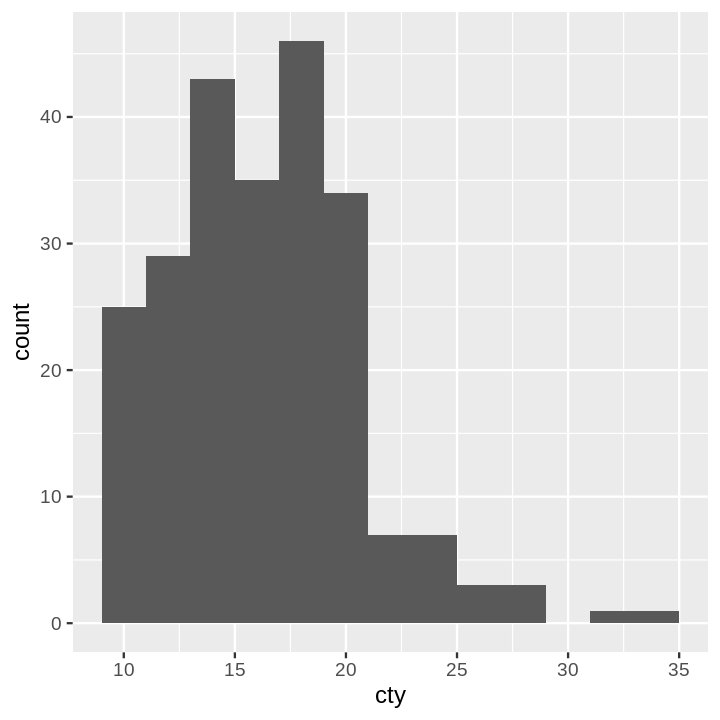 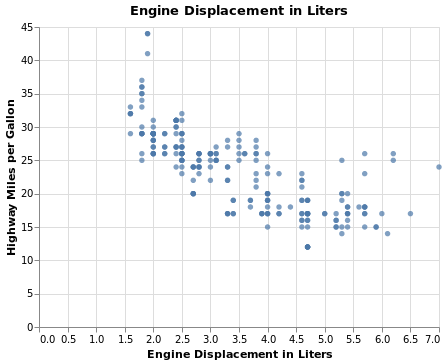 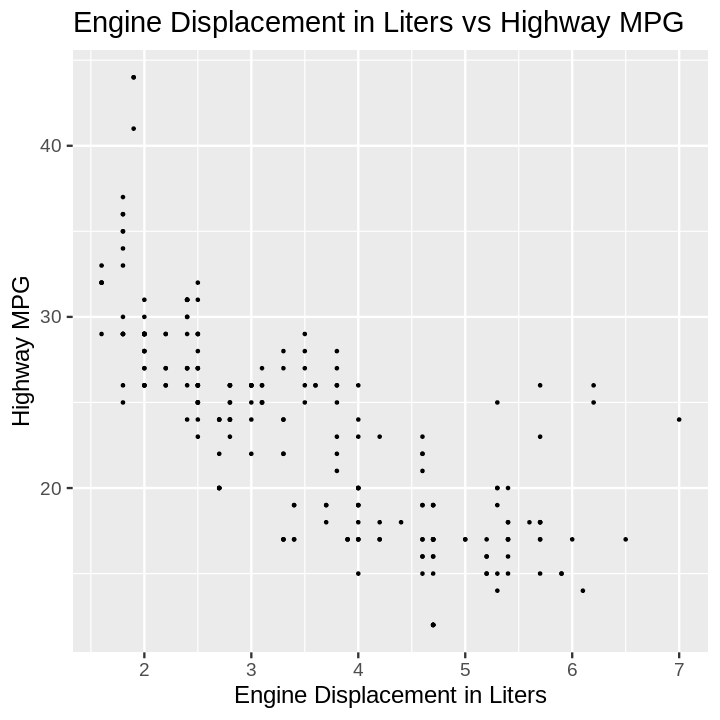 Scatter Plot with Faceted with Color

seaborn.FacetGrid overrides the rcParams['figure.figsize'] global parameter. You have to set the size in the size withsize=inFacetGrid` 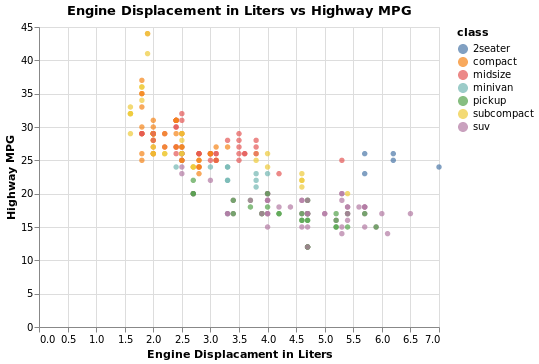 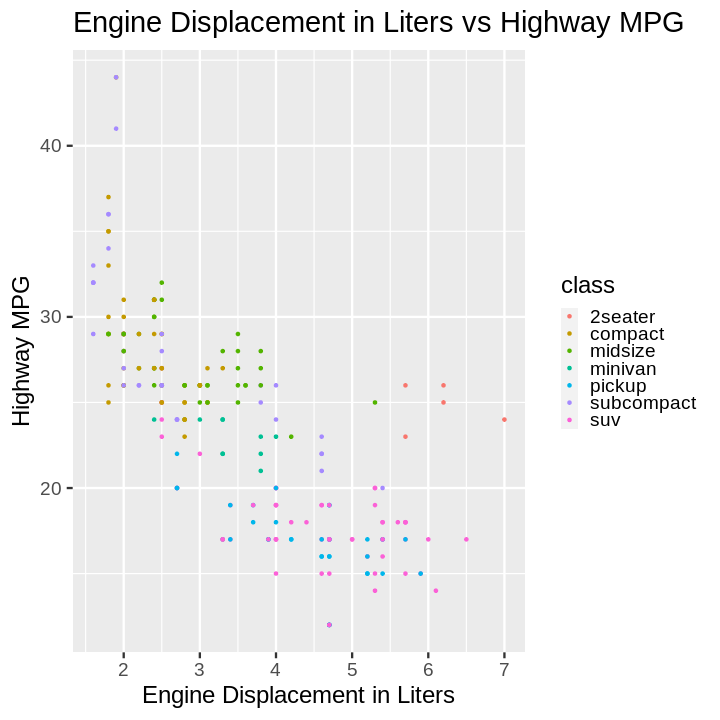 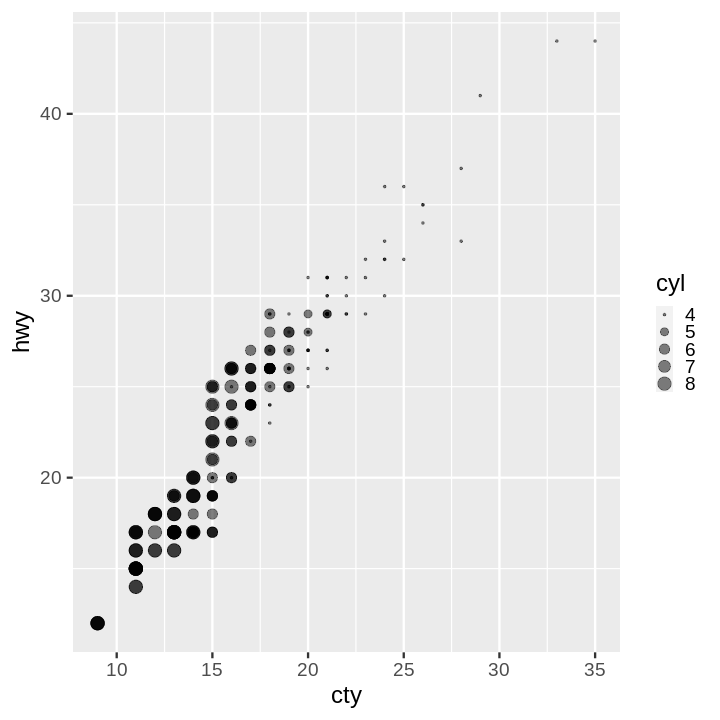 Scatter Plot Faceted on One Variable 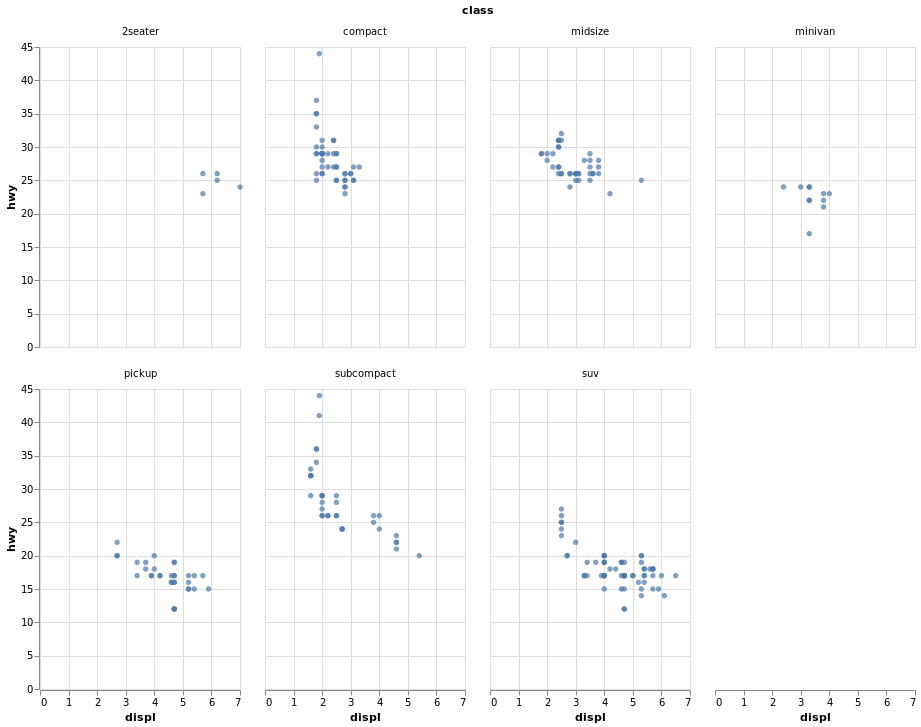 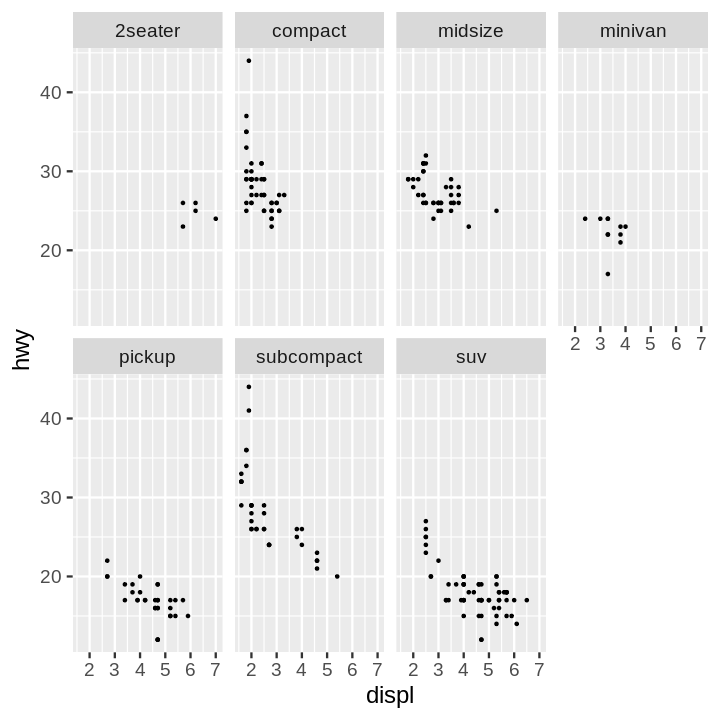 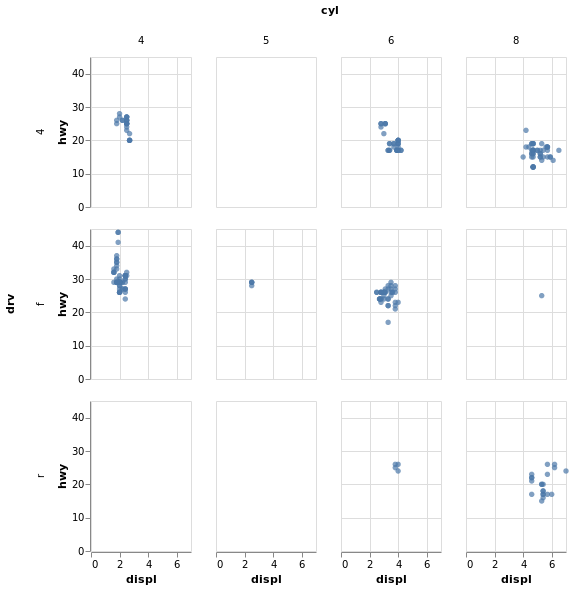 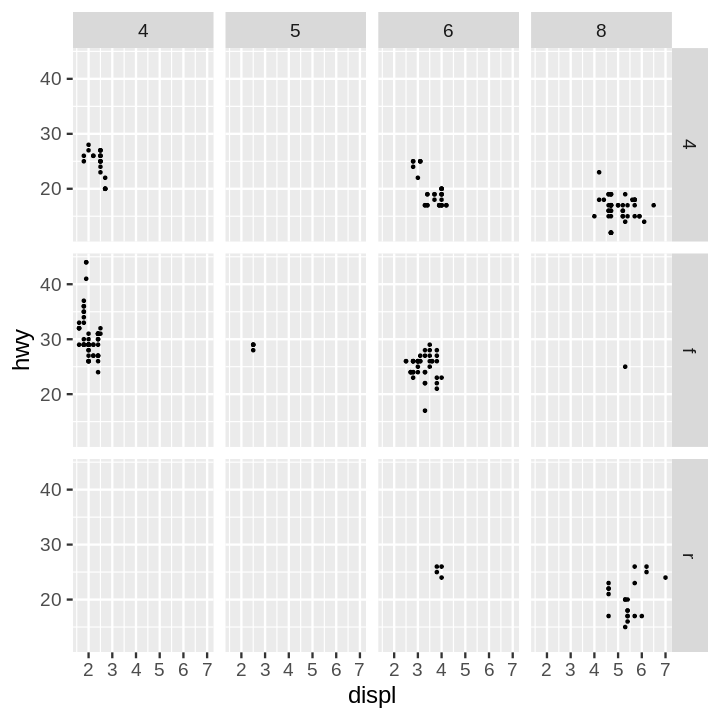 No built in method to calculate and display confidence intervals. Must calculate manually and utilise existing features to build the confidence band. 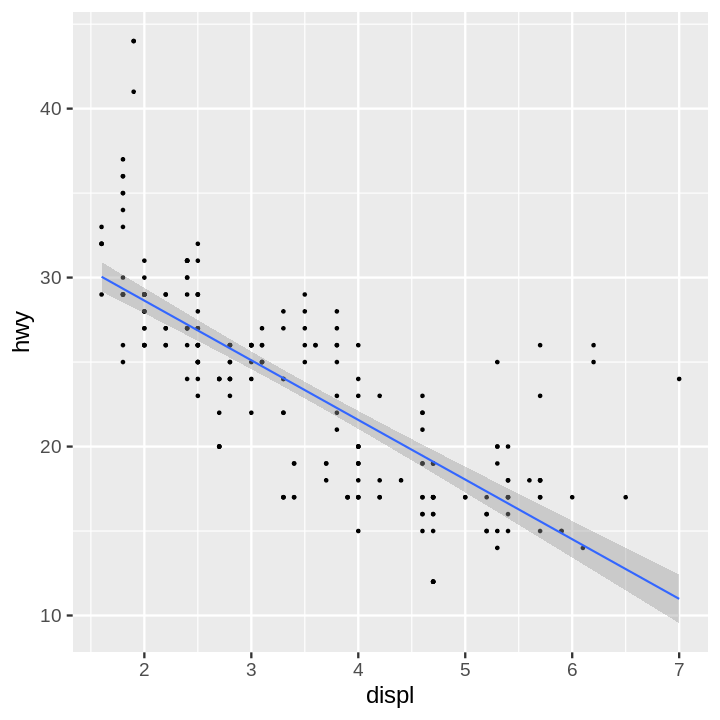 Notice the smoothed line isn't as smooth as it is in ggplot2. 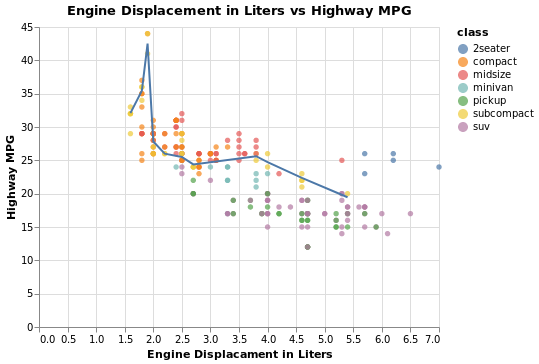 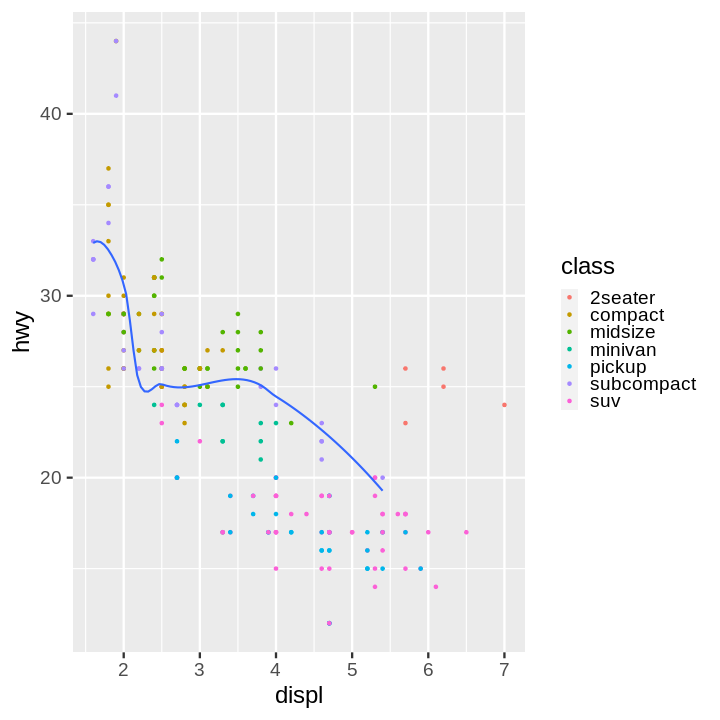 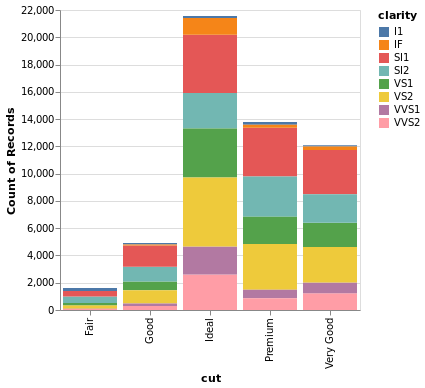 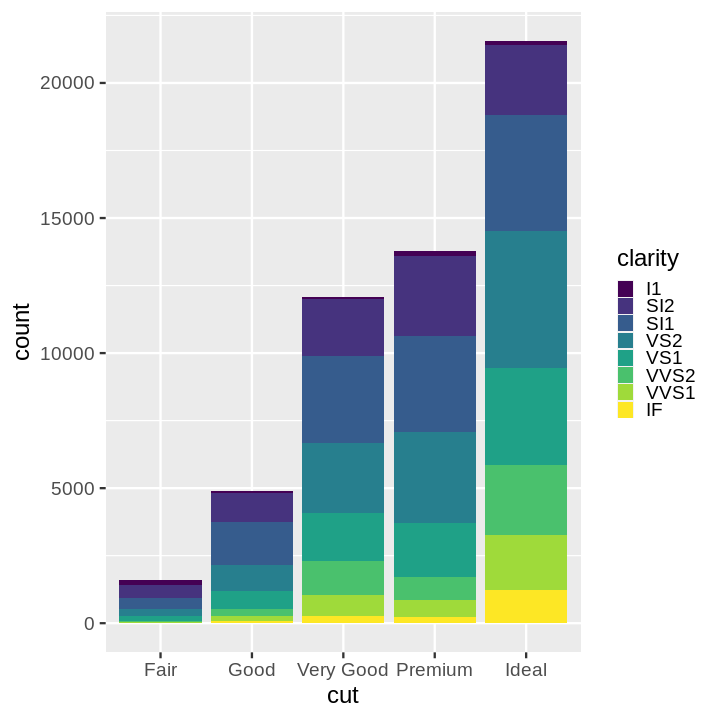 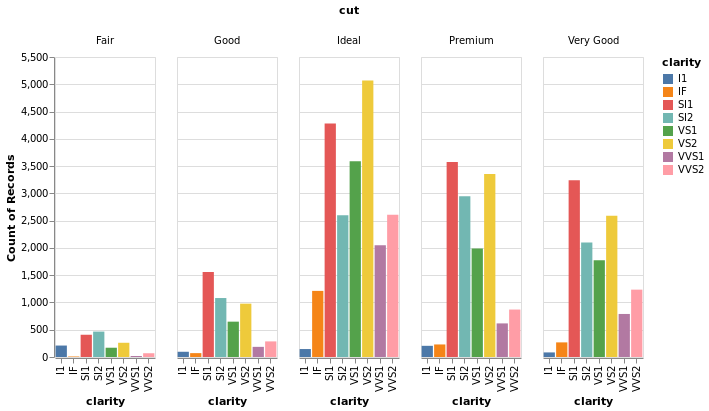 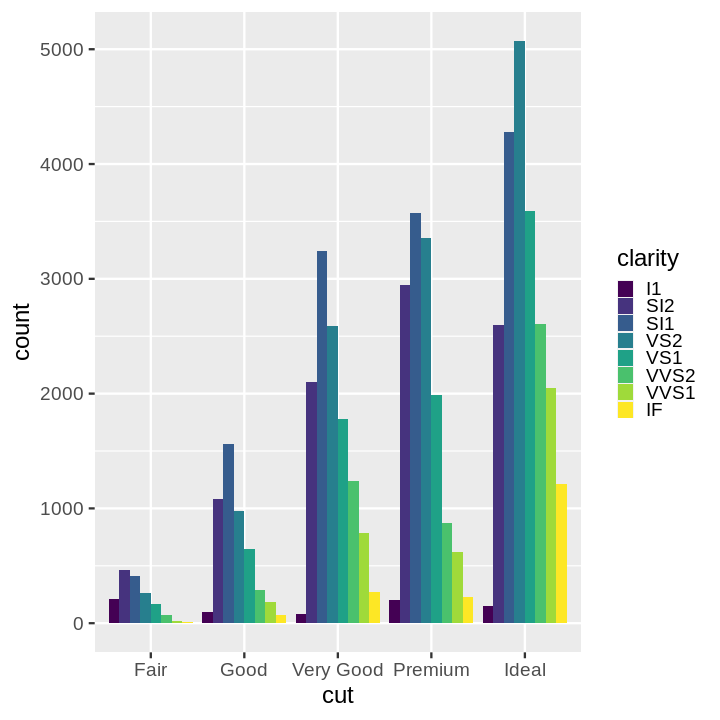 I don't know whether Pandas can fill a KDE curve.

This requires using some Matplotlib to get them to stack and to have a legend. 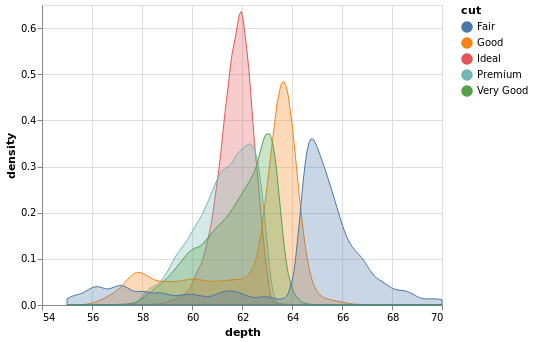 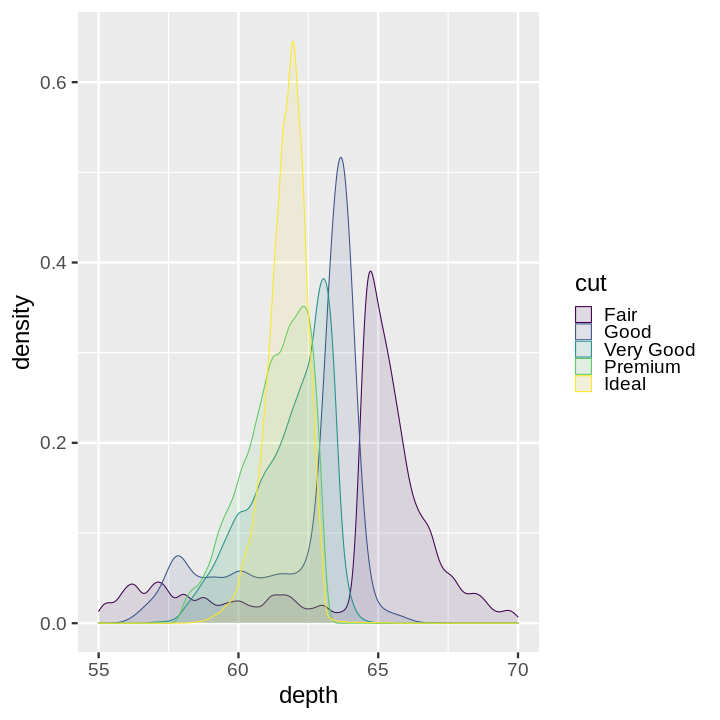